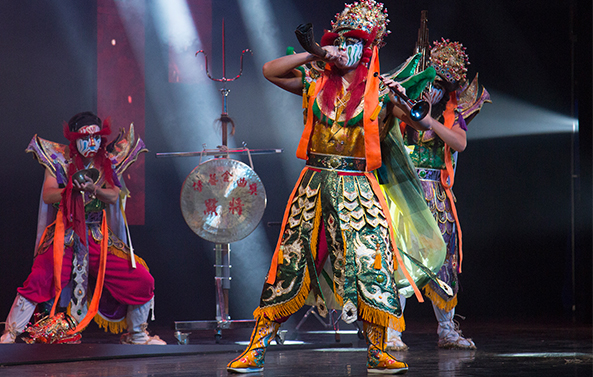 Po You Set
Po You Set is a Taiwanese theatre troupe ambitious in telling stories in Taiwan through experimental drama. The troupe is aware of Taiwan’s historical background and its multiculturalism. On this beautiful island, we can find all kinds of cultural elements, traditional and contemporary, Eastern and Western. However, the privileged diversity does not result in a culture that belongs to Taiwan itself. Therefore, Po You Set claims that one of the major missions of the present generation is to figure out and develop such a culture. Founded in July 2007, the troupe regards itself as a platform on which all forms of performing arts are welcomed. In order to realize a genuine Taiwanese theatre culture, the troupe integrates elements drawn from different ethnic groups or countries. Currently the troupe still keeps breaking limits and finding more possibilities in theatre, such as Beijing opera, Kun opera, and all kinds of Eastern and Western drama, etc.

Seahorse Band
Seahorse Band was founded in 1999 and was shortlisted for the 23rd Golden Melody Awards for Traditional Arts and Music with its album Wandering of a Traveler in 2012. The name “Seahorse” can be understood separately. Sea symbolizes Taiwan—the hometown of the band’s six members. It also suggests a broad-minded, all-embracing spirit just like the open sea. Horse reflects its free, wild music style. The band features the ancient, mysterious khoomei (throat singing) and a combination of creative music and orchestration of special instruments. A combination of the Mongolian instrument matouqin; the Chinese instruments of huqin, pipa, and souna; and percussion from around the world form the major part of Seahorse’s music. The leader Hsu Hao-Hsiang’s background in music design and theatre further adds diversity to Seahorse. Currently the band is experimenting on traditional tunes and looking for more sound combinations to bridge the gap between the sea and the land (horse).